Over the Easter weekend, I attended and spoke breifly at a conference for interfaith dialogue. It was put on in Erfoud, about 6 hours south of Ifrane, by a friend who works on cross-cultural projects. An hour of the conference was for a round table discussion that consisted of a few Moroccans and Americans speaking about the importance of interfaith dialoge to world peace. I was invited to tag along last minute, happy to explore a region of Morocco so different from the Middle Atlas. 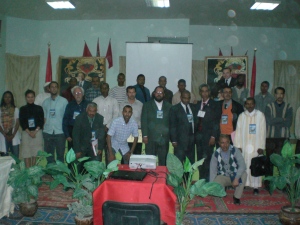 Participants of the 1st Annual Conference for Interfaith Dialogue

Nothing groundbreaking, really, but as this conference was the first annual, it will hopefully serve as a foundation for actual interfaith dialogue in the future. The rest of our time was devoted to visiting cultural and historical sites in small towns located between Erfoud and Rissani.

In Rissani, we visited the mausoleum of Moulay Ali Cherif, the founder of the current Alaouite Dynasty. The walls mausolem are covered in beautiful moroccan tile, carved plaster, and woodwork, and surround a lush inner courtyard garden. That same day it rained heavily, temporarily flooding the streets. It was strange to experience such extreme rain in the desert, though apparently storms like that aren’t completely uncommon. 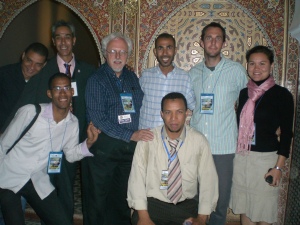 Posing in front of the intricate doors inside the mausoleum

Geographically, Erfoud is dramatically different from Ifrane and other towns in the Middle Atlas and is located in the dry Tafilalt region. The Tafilalt is best known for its large, beautiful oasis. 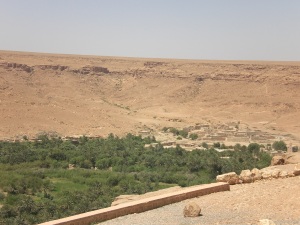 In a small oasis town outside of Erfoud, we visited a women’s co-op that produces a coffee-like drink made from roasting and grinding the pits of dates, which grow in abundance. I would never mistake it for coffee, but it had a great earthy, gritty texture. 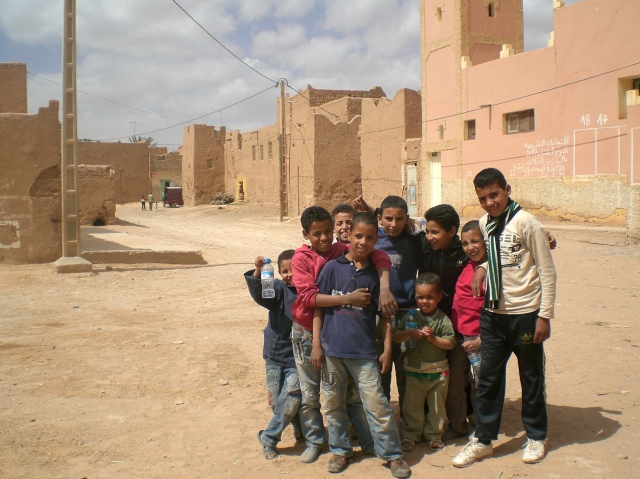 Energetic residents of an oasis town outside Erfoud

We walked through the town’s qasar, or old fortified city completely surrounded by walls and was traditionally heavily gaurded and patrolled. These days, people still live in the qasar, though since the townspeople don’t have to worry about raids, the doors are no longer locked and guarded.

I was happy to receive a tour and explaination of the town’s irrigation system. Water runs from underground wells called Khatanas and flow down irrigation ditches. The mud walls of the ditch are shoveled out to allow for the water to run into individual tracks of land, then patched back up to re-divert the water. People are allotted a specific number of usage hours to irrigate their land. 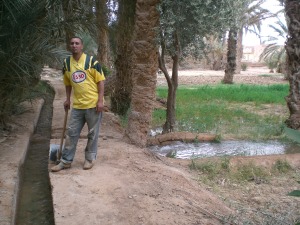 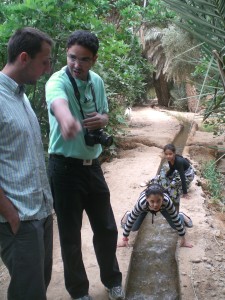 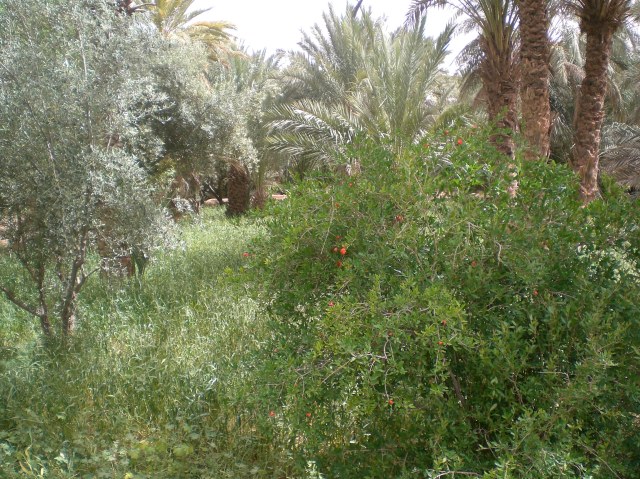 Just outside the lush plots of land is the Saharan desert. Anti-sand sheilds, built from palm fronds, are used to prevent the sand from encroaching on arable land, however, desertification is still a problem. 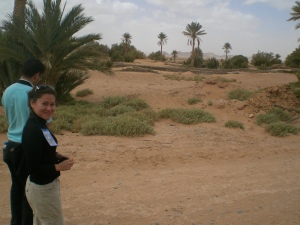 In a second small town between Erfoud and Rissani, we visited a second qasar, the ruins of a king’s palace and popped in to observe a class at the local grade school. 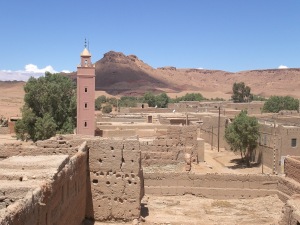 View of town from inside the qasar 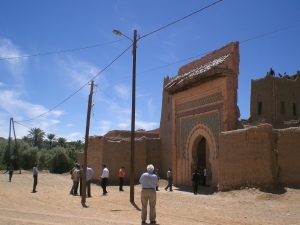 Still standing at the entrance to the qasar is a beautiful tile door dating from the 13th century. 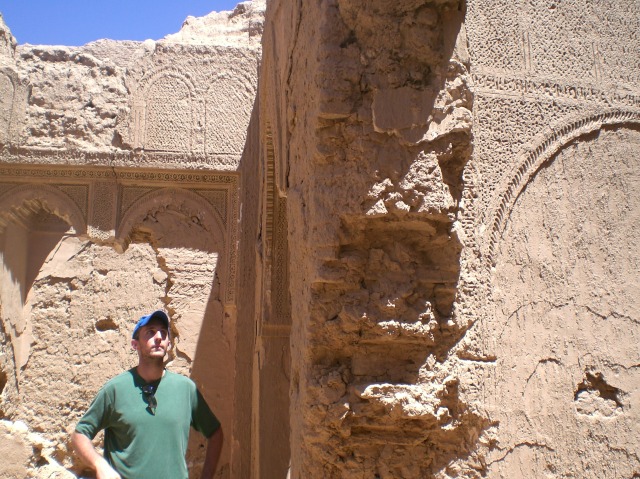 Roger in what remains of the King's palace 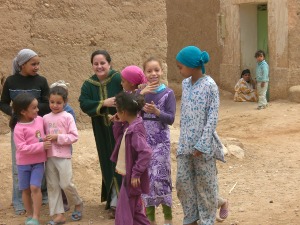 Laura McAdams is a Master’s student at University of Pennsylvania studying International Educational Development. Her experience in the MENA region includes 15 months as a Fulbright student researcher to Fez and Ifrane, Morocco in 2010 and 2011. Her project was interested in understanding the disconnect between the policies of technology usage in education and the reality of how these policies unfold in the classroom. Summer 2012 she returned to the Middle Atlas mountains of Morocco to work with a women’s weaving cooperative. She is excited to learn more about other countries in the MENA region and issues involving education policy and reform, technology usage in curriculums and gender equality in education. One of Laura’s lifelong goals is to one day be able to sit down and leisurely read a newspaper in Arabic.
View all posts by Laura McAdams →
This entry was posted in Fulbright Student Research in Morocco, 2010-2011, Uncategorized. Bookmark the permalink.